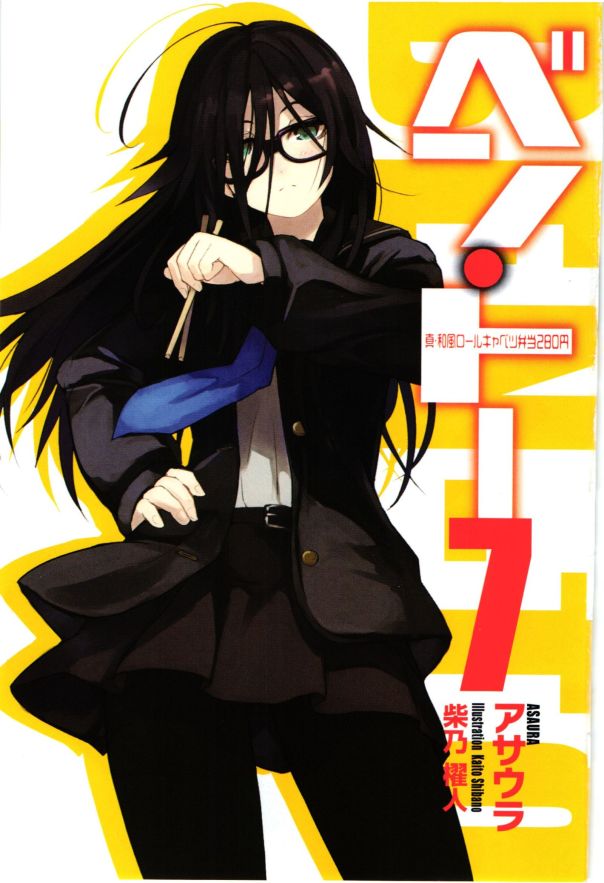 Original artwork on the novel.

“You know Satou, not long after his graduation Masayoshi went on being a knight and saw the decline in the members as they all aged. And not every youngster would meddle with older kids. They found themselves to weak. People started using group tactics or push the owner of the small super to be quick about it.

On top of that he could not be everywhere at the same time. The old fool made one final decision as a knight. To become a God. He left his former job and became an attendant here at the supermarket. To put a half priced sticker on the bento.

Rules are made to be broken but he was righteous through and through and gave everybody a fair chance. And from what I heard from Wizard. So are you Satou and thus Masayoshi must have made his presence known to you. And as I may have mention, it shall then be you who inherit the name of King!

It has been foretold something big was going to happen. Or rather it was Masayoshi who was dancing around his walking stick and smiling that big happy smile of his. If it is you I have faith the right thing will be done.”

The cup was put on the desk and the old man stood up behind bowed down towards Satou and excuse himself. “There be work to be done, so please would you honour this old man and carry on the title of King. To honour the rules and become a example of a true knight.”

Satou couldn’t help but have blush on his cheeks and felt a slight discomfort after hearing his plead. ‘No, no but someone much stronger than me is more suited to become your successor Master.”

“King, uhmm Satou he has chosen you. He  kept an eye on you as he followed you. It has to be you. Please except this destiny and go forth bringing honour back among the fallen.’

Without another word the old man slit past his desk. His movements creating that small breeze to make the receipts flutter. Leading Satou out of his tiny office. With hands folded on his back he stood there in his tracksuit with a slight bend back. His eyes were closed and he had a calm smile stuck to his face.

“Thank you Old man, I will accept, though I am not sure I would have been the right choice.”

-“No need to worry Young King, Arthur has never been wrong before. Now go.” He opened his eyes and so Satou straighten back up from a deep bow before running off through the swinging doors.

As the old man turns he sees Masayoshi stand beside him smiling while leaning on his cane. “Thank you for saving me that day Senpai. He will do fine, won’t he?”

Masayoshi smiled even bigger while patting the old man’s shoulder before vanishing into thin air and leaving behind his echoing voice. “He will be the founder of the New Kingdom Knights.”

Satou rushes fast as he can through the streets, back to the school he is attending and the room that has been the centre of the half-pricing Bento Club. Slipping through corners he passes Monk, who had no time to say what came to his mind, on the school yards and into the building. In the wind the words were left behind while Monk scratched his bold head. “Pervert, what is up, I just saw…”

Satou wasted little time as possible and shot up the stairs barging through the doors. With a crash and a big breath he came to a hold inside and look into the room.

Around the round table sat Yarizui Senpai with her usual blank stare. One could never know what was on her mind. Beside her was Oshiroi with her laptop and candid happy look hiding behind her shiny glasses. It was the moment Shaga saw chance to jump behind the seat of Oshiroi and dug with her hands into the uniform. “Oh come on what colour are you wearing to day”.

“You found your answer, Satou?” Yarizui asks with a tone that states she already knows what the answer was going to be.

They were being their usual selves and it made Satou smile seeing them all together in this room again. Not to long ago they have been venturing into the neighbouring towns and even took a step into the big city for a book release.

Except it wasn’t entirely like the usual as Satou stood up and saw more faces sitting around the table.

“Hey hello again Satou-san when will we have a change to eat each other again.” The formal greeting came from one of the Orthrus Twins.
-“Nee-san, That might be meaning something else to Hentai-san”

“You might be right Kyou, I am so sorry. But we are after him are we not”
Her twin sister slaps her self on the forehead. “It is okay Nee-san, something like that”

A male voice took over the grins, smiles and conversation. The click of a chair hitting the ground could be heard when a face appeared hanging over the table. “Heard you got beat up by a ghost.”

It was Nikaidou who was standing up after lounging his chair against the wall. The view was obscured by Oshiroi’s screen and the busty Shaga.

Not long after Satou walked up to the table where his friends and former enemies had gathered.

“It is true I have been seeing a ghost, And I did not get beaten by the ghost.”

Satou started telling the story he had heard from the old man while they drank a warm cup of tea and as the end was nearing Satou made a bold fist.

“I hope you can all lend me a hand, to beat the pigs who dare rampage our battle fields and show them what it means to be honourable wolves.”

“FIGHT ON” Shaga screams from the top of her longs and stretched her fist to the centre of the table.

It did not even take another second for the others to follow with a loud howl that stretched out over the school heard into the ears of wolves afar.