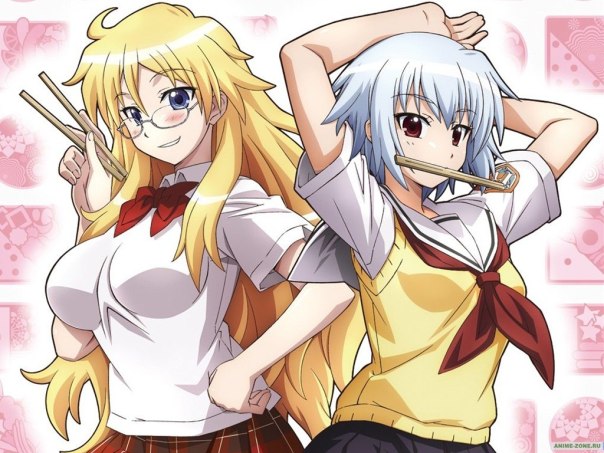 Kyou stood up and stared at Satou from across the table. Retracting her fist and pointing it with a finger straight at him. “We will fight beside you this time, But next time we’ll hunt you down like the two dogs you are, bitches.” Her lips curled up in a faint smile going around the table and ending looking down on her sister. “Hey Kyou, I did that right, didn’t I?”

“Don’t mingle me in the same class as that Pervert!” Nikaidou still could not agree with being  on equal grounds or compared with Satou.

Shaga smiled and looked at the angry face he was showing. “We should find you a nice pet name than if you want to stay a little doggy.” Petting his head that quickly retracted and growled.

“There is no other way than to try, Orthrus.” Satou’s thumb was held up as he smiled like a crook with a scheme.

It was at that moment the door swept open and a monk was passing through. Leaning on the door knob e lifts his head from his bend body and looks inside the room. “Yo, we heard a howl and came running.” Behind him a brunette popped up with her hair covering half her face and waving her hand. “Last time Barkling was running this hard and so excited something big was about to happen.”

“No way we want to miss that.” Monk finished their analysis and walked inside.

Their eyes were diverted to the wall filled with red/yellow stickers from every half priced bento that had been eaten in that club room. Only a small space was showing the colour of hat the wall used to be. Monk ran his hand along the wall feeling the edges of every sticker like tiny bumps. Brunette just stood quietly with her arms crossed and a quarter turn away, waiting for someone else to say something.

“We would be happy to have you.” Satou said with a stretched hand towards the Monk. “It’s going to be tough though.  Lots harder than handling ‘Hercules Club’.

Monk slouched his back a little and rubbed his thumb across his nose before placing it inside his pockets. “It is bound to be glorious with Pervert involved. We won’t lose.”

“Exactly” Was all Brunette said.

“Well all that is left is to ask the other wolves from the playground” Senpai smiled pushing her chair away and taking a stand beside Satou.

Everyone is high spirits of the upcoming event, except one.

Her eyes were fixed on her screen as fingers flew in rapid speed across her keyboard. Oshiroi was way past the spirits and in heaven mumbling her story as letters flashed onto the screen and reflected perfectly in her glasses. The corner of her lips curled up with from every corner little drops of saliva creeping forth.

“Saitou… Ghehe had his hands clasped tightly around those of the Monk. On his knees he took in every word of his prayer. Bearing his cross… ghehe… in search for salvation he waited for its blessing to cover his sinful mind.”

Everyone’s eyes glared with a blank stare towards the frantic and hyperventilating Oshiroi. Nobody dared to ask what was going through her mind.

Oshiroi’s cheeks were shining like a traffic light with a vibrant red as she dug deeper in her fantasy world her body leaned into her laptop. She was a high speed biker digging her nose into the screen. Instead of cycling she was typing like a storm. Fingers fluttered across her board until she stopped with a deep satisfying sigh.

Hands slipped of the table and held in front of her small chest. “Finished.. Ghehe…. So hot..” Her head dropped back and turned towards Satou. Eyes shiny with adoration and glee, cheeks still retaining some of her bush she just smiled and surprised everyone. “You are the best Satou.” Her thumb stuck up firmly into he air as she sucked a drop of drool from the corner of her lips.

The rest was like a gang of imprisoned monkeys, with wide open eyes looking stoic into a distance, unmoveable and I complete shock of her words that were seemingly implying something lewd he must have done to her.

All had their own thoughts but it came down to one thing. ‘He is a Pervert, first class!’

Well all but one that is.

“Time to go Satou.” It was Senpai with an elbow poked in his side as she walked passed him to the door.

The walked down the stairs and off the school grounds.

Outside the gate a large man stepped into their path. His long white coat was floating in the a small gush of wind. His hands rolled two big walnuts around like two baoding balls. “Yoh, Pervert, There is a rumour going around of a wolf’s howl coming from this school. Was it yours?”

Monarch was asking in a slow and articulate tone. He never forgot how he was beaten by him and ended up lying on the sofa of the true ‘Monarch Butterfly’. “I see a gathering of some strong wolves here and also Nikaidou, it has been a while. Let me be clear, if it is a fight, I want in!”

His brows knitted together with the cracks being formed that lead to a small explosion in his hand when the two nuts were crushed by brute force.

Satou could only look down and watch parts of the shell fall down to the ground. With his head rising he stood in the middle of a group that were ready to punch at any given second. Anger and hatred clearly seen in every gleaming eye.

Waiting for the word a hand was put out in front of Monarch. “We could use you to liberate at least one super.”

Satou did not hold any grudges to those who wanted to knock him out of the field. In his mind they all came out for one thing and that is the half priced bento. He said it before and he truly believes that tears do not belong on the battlefield.

Like a band of brothers, a group of knights they head out with heads held high in pride.