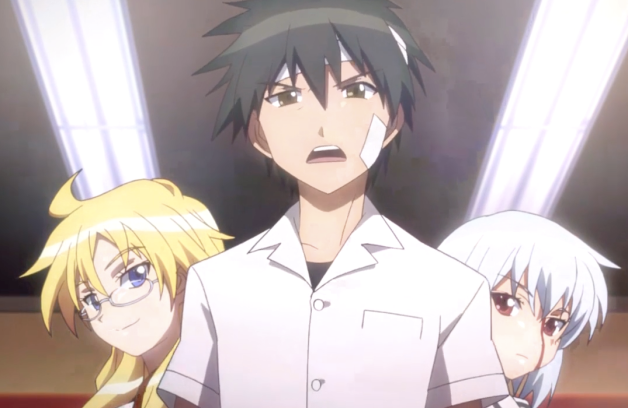 The small town was in an uproar. A tiny rumour went around like a wildfire and had a many a wolf and stray dogs hear of it. The Pervert was going out of town for a bento brawl fest. All of the big names were going and everyone of them wanted to know where they were going. Inquiries were made by the many who have heard it. Tummies were rumbling with just a thought of the strongest being out of town.

Still there were doubts. “Will it be as good as with them around?”

“It might be easy to obtain a bento this time, who cares!”

“I even heard Monarch is going, was he not beaten by the pervert and that Ice Witch?”

“Like hell I am staying here. I am going. Just think of that big rumble when he beat that ‘Hercules’ Club’. It was epic even though I did not get a bento it was worth it.”

“Do you know where they are going?”

There were barks everywhere while others took up their pride and looked into e places the Pervert was going to. Quickly a group would see them head to the train station and flip open their phones to message around.

Time passed on and the people were gathering at the station. Peeks were thrown over the shoulders to see where the ticket would bring them. And not before long a train stopped in front of Satou and the followers. He gave the phone to his Senpai, “would you do the honours please.”

From behind pillars and vending machines came people slipping in the train sets. Hats pulled over to the front to hide their black eyes they received from the days before. Colours of shirts pulled up to conceal the bruises on their faces. Inside the compartments a menacing aura set the train ablaze, giving everyone who would not know the intentions feel a shiver of fear crawl up their spine and raise the hairs.

Bandages hanging from pockets, of clearly wounded hands. Moving rapidly like the many other fingers and hands tapping on every kind of surface. Excitement through out.

Satou on the other hand just leisurely sat with cards in his hands playing a game with Sen, Shaga and Nikaidou. Not a wrinkle on his head as he watched the scenery pass by. After al t was just something he felt he needed to do. He was asked by an unfortunate participant, he heard of the story from one of the oldest wolves. And most important he has brought up by Senpai an honourable wolf by the name of ‘Ice Witch’.

Apparently this was his destiny. “To become King.”

-“What was that Pervert. To become King? Are you dreaming, or did you forget what that kind of idea did to me?” Monarch talked sturdy and laughed loud after.

It was true he was defeated. Wanting to be the strongest of the east and west. He thought he done everything to insure victory but his feet got swept away by a mere Pervert. His dream was crushed by three strong wolves who had nothing but their pride and honour. He silently envied them as he spoke.

Satou shakes his head and hands wildly when he sees Monarch’s eyes frown at his outspoken whisper. “It is not that, It is something else. Hehe like a dream” It was not like he was lying to him, but he can’t tell him the truth just yet can he. In just a short year his life has been thrown up side down. From the struggle of an almost empty wallet and the beating after his first day at school.

The difficulties he had to endure of the sot slender legs… He shakes his head a second time to come back from the images of those powerful yet beautiful legs. Eyes roll in his sockets and find the pair of legs he so vividly remembered. From heel to the hem of the skirt h traced the outline and unwittingly tilted his head as he reached her thighs.

From outside the grinding and squeaks of the brakes could be heard. A gentle force pushed everyone around as the train slowly came to a stop. The group had settled themselves in front of the door and waited patiently for it to open.

Not a were like that soon as the doors parted a push from inside the train compacted the people waiting like sardine in a can. Sen’s body was pushed up the back of Satou who started to blush.

The soft breast rubbed against his back with a strong forced but never felt hard. The bounciness just froze his body and mind and took him on a perverted trip.

With a hiss the doors were wide open and the pressure became unbearable. It pushed itself out with Satou in the lead and falling face down below the single step and everybody else rolling, falling and walking all over him to reach the platform.

Nobody had eyes on him, they al stepped out of the train like a single organism. A group call from the wild had each and everyone steamroll to the corners of the station, leaving Satou to get up on his own. Dirtied by shoes his back was an work of art of mostly black while he front was glowing a vibrant red from the moment he planted his face in the cement floor.

“Ah they are here already, got to go Yuu. Bye, bye.” A phone is folded shut and put away in a dark jacket. With a tip of a slender finger a pair glasses are pushed back reflecting a sinister flare and continue to trail long black hair behind an ear. Only a moment later does the hand start to wave to the upcoming group Satou is leading. “Over here, come this way. Thank you for the heads up Yarizui, it got me all fired up.”

Monarch stated to stutter and pointed a trembling finger towards the person calling. “Wait that… that is… You know… HER! She’s…”